Jane and I bought Grouseland in 1995 and established Grouseland Tours in 1998.

When we first saw the property it had an abandoned cabin shell and an impossible driveway. But it held tremendous promise. Since then we have turned the ransacked cabin into a comfortable place to live. We cleared the field and made a campground there, planted 150+ fruit trees and bushes (apple, pear, cherry, peach, plumb, nectarine, apricot, gooseberry, and blueberry) so that eventually, when ever our guests come, we will have fresh fruit for them.
The pond now has a shaded dock with hammock and two kayaks and a B&B cottage. Of course we also put up the bike shop, cut 10 miles of trails and got the business going.
Since then we have become friends with hundreds of  wonderful people interested in biking.
On that end alone it has been well worth our while.

When Jane and I first got the property, we were constantly given heart attacks by Grouse exploding at our feet. It was obvious that there were a lot of Ruffed Grouse on the land.
We also knew that the Ruffed Grouse is the Pennsylvania State Bird. And even though President William Henry Harrison's home estate is called Grouseland, he just didn't serve long enough to warrant our not using the name.
Especially since Jane and I have had a running joke about Elvis ever since we met.
Our Mascot is named Elvis and where else would you find Elvis A Grouse than at Grouseland! 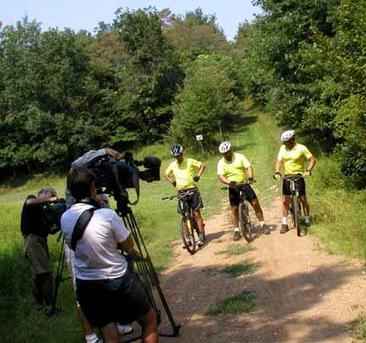 In late July of 2002 2 cameramen and a sound woman working for Barrett Productions came to Grouseland to film a section for ESPN II's Destination Outdoors which aired on Feb. 2 2003.
We were the last day on their schedule and the crew was hot, (it was in the mid 90s') tired and a bit cranky from having to put up with "Local Talent" all week (yokels who flub their lines and constantly stare into the camera).
Fortunately Tony is one of the most out going, friendly and funny people I know, and Chris was a world class and Olympic runner (he is now the running coach at Auburn University). They even realized after a while that I knew what I was doing and by the end of the day we were all getting along great and having a good time.
Our Smart Person's Guide to Mountain Biking contains the 5 minute section that was aired on ESPN.